Also to reduce drop out these tournaments are not auto-enrollment.

There will be set dates for certain rounds to be completed to aid the smooth running and reduce the time people are waiting for others. 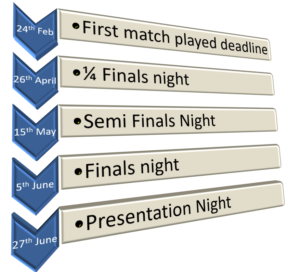 All Cup games should be PAR13 best of 5,

apart from the Handicap described below

This means a point is scored every rally regardless of who is serving.

Handicap Matches are best of 3 games.  Each game is to 15 points.

Where player handicaps are both either + or – the player with the higher ranking number needs to score 15 points to win. 2 points clear is still needed like a normal PAR scoring game

The other player will need to score 15 + the difference in the handicap.